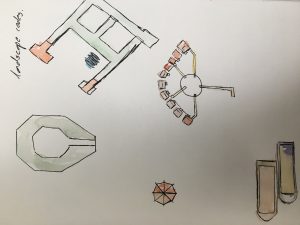 After my period of historical research, I began to sketch land formations/ large structures that can be seen from Google Earth on Pulau Kemaro Island today. These were oil tankers, a large biomass factory, barge boats, barge moorings and the two religious temples. Again, this pairing of the religious and the industrial seemed so integral to the island.

Simultaneously I became particularly interested in one item from the collection; a jigsaw puzzle. The puzzle was in a box and had a painted image of woman on it, titled Woman beside Temple (Bali).  It was given to the donor of the collection on one of her journeys from the Netherlands to Sumatra on a Rotterdamsche Lloyd ship in the late 40’s, early 50s. The image, painted by a French artist, is part of a larger collection of paintings for puzzles and menus. There is certainly a sense of ‘the other’, ‘the exotic’ in the representation of the women. She is standing beside a gargoyle, carrying fruit on her head and wearing a white wrap-around garment which doesn’t not seem to be historically accurate in terms of traditional clothing worn by Balinese women at that time. For the donor, this puzzle must have been a treasured possession and likely sparked her sense of intrigue and excitement about travelling to a land far away. For me, looking at it now, I feel conflicted. On one hand, there is a sense of naivety and mis-judgement there; a pretty painting of a pretty woman given to the children aboard the ship; a celebration of a relatively unknown culture from a western point of view.  However on the other hand, the fact that these images were also on the menu cards makes me feel that these characters, however fictional, are objectified and wrongly romanticised.

The jigsaw had a missing piece. This missing piece began to represent all the fragmented memories that are held within the archive; all the incomplete histories, all the complexities that make one particular historic event. No collection tells the full story and even ‘official’ historical documents are littered with missing pieces.

I decided that I would make a piece for the puzzle. 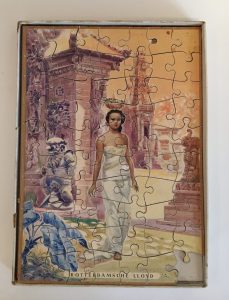