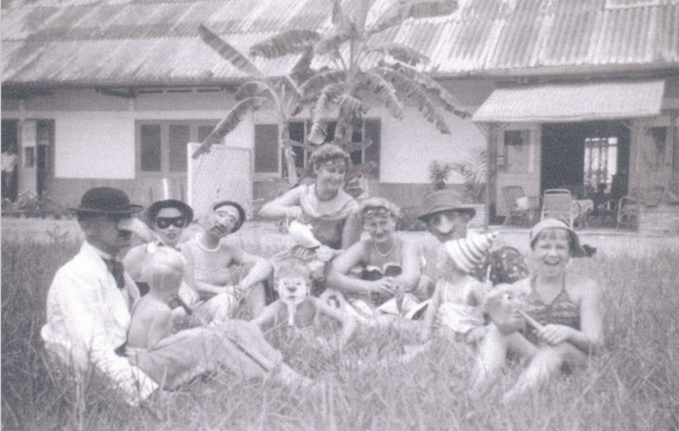 Since my last post I have spent time researching the history of Palau Kemaro, a small island near Palembang in South Sumatra. This was where the donor of my chosen collection lived as a girl. It is a small island but one of historical and touristic significance. Today it is a place where tourists go to escape the heavy industrialisation of the Musi River. On the island there is a Chinese pagoda, the Hok Tjing Rio monastery and a tomb said to be the burial place of Princess Siti Fatima. Buddhist worshipers attend a small temple there. The island is busiest during Chinese New Year and many young lovers travel to the island to carve their names on the ‘Tree of Love’, so much so in fact, that the tree is now fenced off from the public.

The island has a rich and contrasting history. According to folklore the island emerged when Princess Siti, who was due to marry a Chinese prince, drowned in the Musi river. Her marriage was on the condition that her father would received 9 jars of gold as a dowry. The Chinese prince ask for the 9 jars of gold from his family which they duly sent. To protect from thieves however, the family covered the jars in vegetables to look like a simple trade goods package. When the crate arrived the prince despaired that the gold was not there and threw the crate in the river. However one jar fell from the crate and smashed open on the riverside to reveal the gold. In disbelief, the prince jumped in to river to rescue the jars. He did not resurface. Siti Fatima launched herself in to the river too, eager to be with him even in death. She declared ‘If you see mounds of earth appear on the riverbed, you will know that I have drowned as this will be my grave.’ It is this romantic folklore take that attracts young lovers to the island today.

The recent history of the island is, however, is far from romantic. The landscape of the island and greater Palembang has been exploited for centuries due to it’s positioning on the Musi river. In 1619, Dutch East India Company established a port to trade pepper where they obtained exclusive monopoly over pepper trading in the region. Tensions grew between the company and the locals resulting in a group of 28 Dutchmen being kidnapped and forcibly converted to Islam. It is said that 40 other Dutchmen were killed. In retaliation, the VOC (Dutch East India Company) looted and burned the city to ground.

The history of the city thereafter is that of a political pawn between the great trading powers of the West. The British attacked the city in the early 1800’s and then the Dutch, keen to re-establish control, installed a garrison in the mid 1800’s. This was the start of direct colonial rule by the Dutch. What followed was a period a of tremendous economic growth for the city with the development of petroleum and rubber industries.

In the early 1900’s Shell established a refinery on the river banks between Palembang and the island of Palau Kemaro and by the 1930’s the production of crude oil in the Netherlands East Indies totalled 7,398,000 metric tons! Several Western companies operated in the area and the landscape became more and more industrial and polluted whilst the population of the city grew dramatically.

During WWII, the city and it’s island, were then attacked by the Japanese on various occasion as they tried to gain control of the prosperous oil fields. The Dutch and the British Navy largely defended the position and the Japanese surrendered in 1945 but not before establishing support for a Independent Indonesia, free from colonial rule. What followed was a four year armed and politically hostile journey between the Netherlands and the Indonesian republicans.

Its was shortly after Indonesia gained independence that the donor of my chosen collection made the journey to Kemaro Island with her family. To travel to this area whilst the memory of many Dutch civilians being captured and interned in Japanese POW camps was so fresh, must have been terrifying for the donor’s mother.  In an interview for the Expatriate Archive, she notes that she remembered her mother being anxious and upset but was unsure why.

Much of the tropical wilderness of the Indonesian island still existed when she arrived. Luckily it escaped the ravages of industry to a certain extent and she was captivated. It would seem that the romantic folklore of the island was still alive and well in the mind of a Dutch 11 year old girl! Her ‘dream island’ was a place to explore, somewhere to set up ‘dens’, catch fish (and other debris floating down the Musi river!) and generally let the imagination run wild.